One of the unknown, inevitable, and scary parts of owning any property, not just an investment property, is unexpected expenses for repairs and replacements. Sometimes the expenses are small, but other times, they can be quite costly.

Water heaters are an example of a costly expense for many owners. It is our job to help minimize the risk of these expenses. A brand-new water heater is expensive, but some find that replacing them before they go out is better than waiting until they go out. Unfortunately when a water heater goes out, it does not normally just stop making hot water, it starts leaking. Often times the water heater even continues to make hot water while leaking.

To make matters worse, water heaters are usually found tucked away in a closet, garage, or even under a kitchen counter. While this may prevent a bit of an eye sore, it also can prevent residents from identifying the leak while it is minor. While putting in their lease and training our tenant during the move in walk through helps, tenants occasionally fail to notice and/or report leaks in a timely manner. As a result of the tenant-neglect or the fact that the water heater is out of sight out of mind, the leak can cause a great deal of damage that extends beyond the mere replacement of your water heater.  That is why some owners choose to proactively replace their water heaters. They would much rather sacrifice a few potential years of use with the existing water heater than pay the huge costs of cabinetry, drywall, or flooring. Another thing to keep in mind is that the potential flood/leak damage increases exponentially if the waters are on the second or third story.

Another cost to consider in this is lost rents. If your tenant doesn’t have access to hot water, this would constitute an uninhabitable property and would result in crediting prorated rent back to the tenants for the days in which it is considered uninhabitable.

Furthermore, many after-hours result in dispatching a vendor with “after hours billing” this is often much more inflated than normal business hour calls. It always seems like these water heaters never go out during regular business hours!

Most water heaters are sold with a 5-year warranty and are said to last about 10 years on average.

But what if you have insurance? While having insurance is of the utmost importance to help mitigate your risk, most do not cover slow leaks. Most policies state they will only cover “sudden or immediate water losses”.

So now you’re wondering, how can I minimize these seemingly inevitable costs? Here’s how: 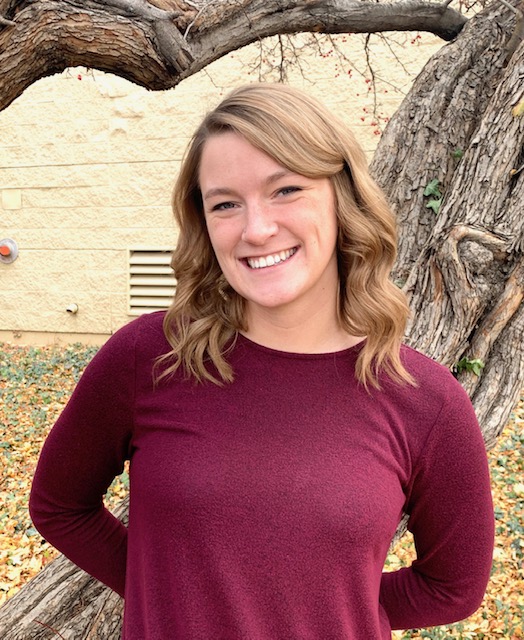 We continue to see Ada County 4 plex values increasing at a steady rate.  The good news is that rents have been increasing as well.  According to the financial information on the Intermountain Multiple Listing Service and financials provided by listing agents, February's Gross Rent Multiplier (GRM)  dropped to 143 from 149 in January.  Compared to sales price, rents have increased.  The trailing 6-month average for GRM still remains at about 150.  With the higher rents, February's Cap rate also increased to 5.36 with a trailing 6-month average of 5.29%, which indicates Buyer's Net Operating Income has increased when compared to sales price. 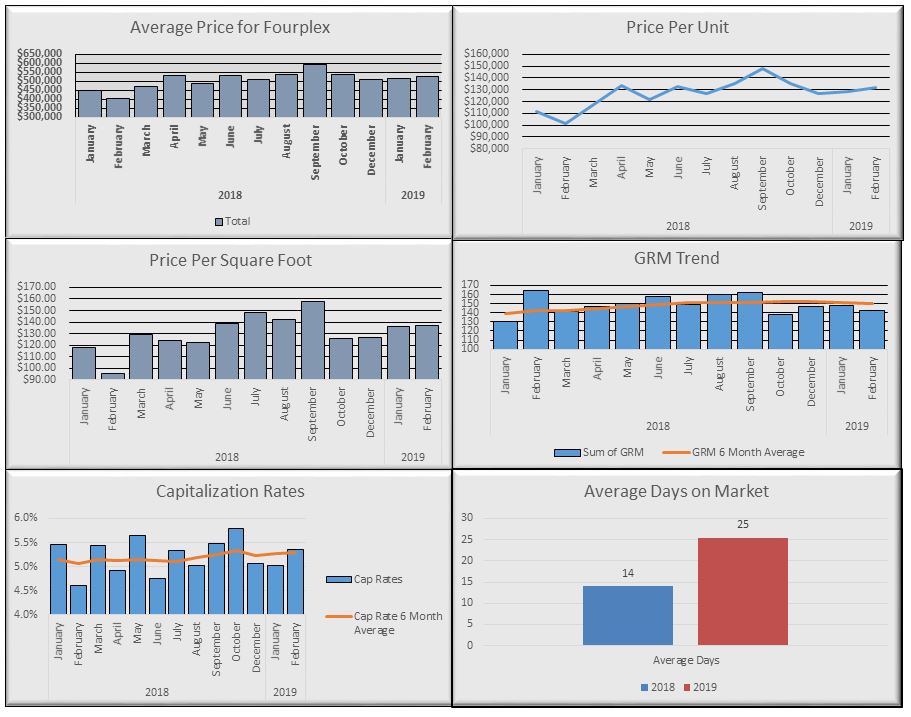 Economy by the Numbers

The following post is from Jack Harty, a commercial lender with Harty Mortgage Advisors.

Various observers of the economy see threats to the economy coming from opposite directions for two different and contradictory reasons.  Some think the economy is weakening; others think it is too vigorous and on the verge of excessive inflation.  That puts the economy somewhere between Scylla and Charybdis aka a Rock and a Hard Place.  We have been warned about mutually exclusive risks of impending recession and an overheating economy (read: inflation).

The ancient Greek economist Homer gave us a graphic depiction of the twin threats to the economy in his epic economic treatise the Odyssey. 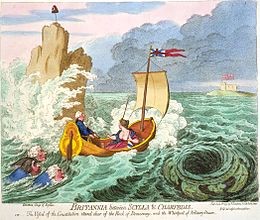 Those who see higher interest rates in the future can still cling to that vision because some day that prediction will be correct…just not in Q1 2019.

Is the sky falling?

For those who still cling to the quaint notion that facts-matter, below are some happy facts.

The Fed ceased tapping the economy’s brakes in January.  Since November, long-term rates have fallen over 50 basis points (1/2%).

The Fed vowed to take a “patient” approach toward further hikes. Powell added that the funds rate [short-term interest rate] is “in the committee’s” range of a neutral rate estimate, a key measure for the Fed.

Idaho unemployment number ranks 4th lowest in the nation at 2.6% (as of 1/18/19).  This compares to Dept of Labor (BLS) numbers for the month of January which showed national unemployment rate at 4.0% (based on U-3 measure).

An equally meaningful measure of unemployment rate is the U6 measure, which for December was at 7.6%.  U6 is at a virtual decade low. In January Labor Force Participation was 63.2%.  It has been in that range for the past 5 years.  Combined with U6 Unemployment, there appears to still be available labor on the sidelines to satisfy labor needs for economic expansion without ginning-up high inflation.

Given the ample supply of labor still on the sidelines, it may explain why January average hourly earnings growth was a tepid 0.1%.  In contrast, for the prior 12 months wage growth was 3.3% which is in excess of 2018 inflation of 1.9% (see graph below).  Higher wages in an approximately 70% consumer-driven economy is a good thing. 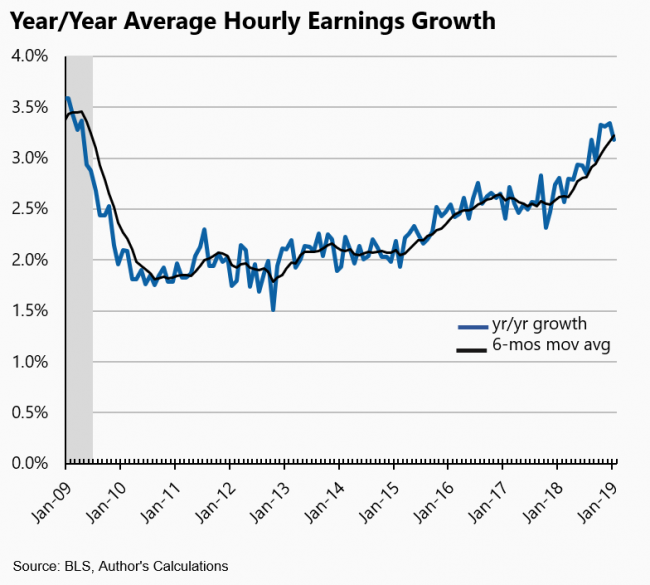 Industrial Capacity Utilization is also a meaningful measure of national economic health.  That number stood at a virtual 10 year high of 78.4% in December.  By comparison, from 1960 - 2000 that rate typically was in the 80% - 85% range.

Currently inflation is <2% - productivity growth (1%) is somewhat mitigating wage growth (3.3%) which has yet to fuel big inflation.

FRPM manages hundreds of fourplexes and I tend to sell more fourplexes than anything else within Ada County (mostly Boise and Meridian), so I gather and report the data.  The trends from the 4 plexes' sales seem to be a good indicator of the Boise real estate investment market.   Below are some graphs to help illustrate my points.  Please note that there were no fourplexes sold within Ada county for the month of November.

Absorption rate:   Is the rate at which available fourplexes are sold.  Currently there is less than one month's supply listed on the MLS.  We have a low supply and the demand continues to be great, so they are selling quickly.  Obviously this is a good sign for Sellers.  It means that new listings are going pending fairly quickly.  So as a buyer, you want to have your ducks in a row.  You will want to be in position to make a strong and clean offer quickly.

Average Price for Fourplex:   Prices continue to creep upward.  In January of 2017 the average was $372,000 and in September of 2018, the average was nearly $600,000.   One could look at the chart and because we saw a drop in October and December, they could think values are dropping.  I don't believe that is the case.  We had a couple older 4 plexes with below market rents sell and skew the data.

Gross Rent Multiplier (GRM):  Is the ratio of the price/value to its monthly rental income.  The current 6-month average GRM for Ada County 4 plex is 152.  I use GRM for a quick ballpark value as there are many more factors in determining actual value.  To illustrate how to use GRM, let's assume that rents are $950 per month per unit. Using GRM, the ballpark value would be $950*4*152=$577,600.  It's not uncommon for Landlords not to push rents.  This is one reason why GRM alone won't determine value.  But it's also a good reminder to potential sellers that if you are planning on listing soon, you should consider getting rents to market before listing.

Capitalization rate:  Is the ratio of Net Operating Income to value/price.  Since 4 plexes are considered residential, cap rate is just one of the factors used by a residential appraisers to determine value.  Comparative sales weigh heavy on Fourplex appraisal valuations.  As you can see, we've had a very slow, yet slight drop in cap rates over the past two years.  This is a good trend in comparison to huge drop we saw in 2005.  Values have continued to rise and they are rising just a little faster than rents.

Average Days-On-Market:  Even in a super-hot market, It's hard to believe the average days-on-market for a Fourplex could be as little as 18 days.  There are a couple of factors here.  We are seeing a fair number of cash deals which can close much faster.  But the biggest factor I see here is new construction.  At least one brokerage is not posting their newly constructed Fourplexes on the MLS until the property is sold, which in affect shows zero days on market. 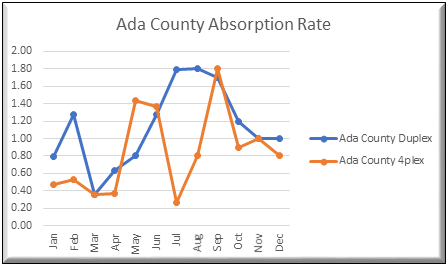 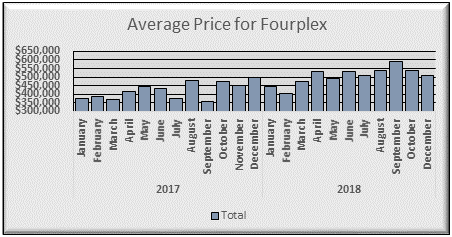 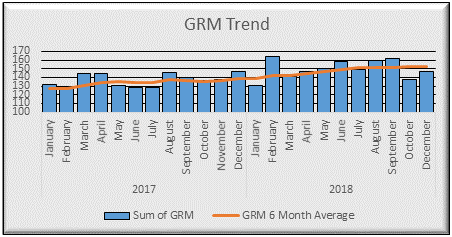 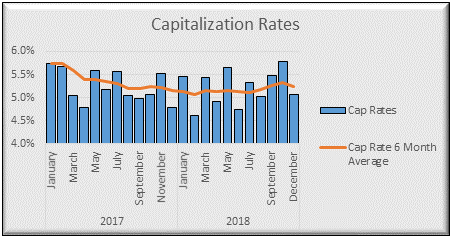 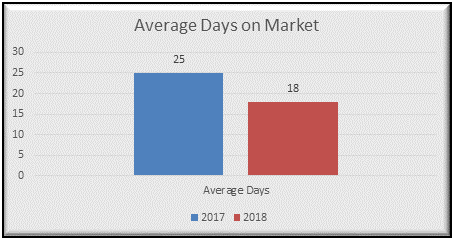